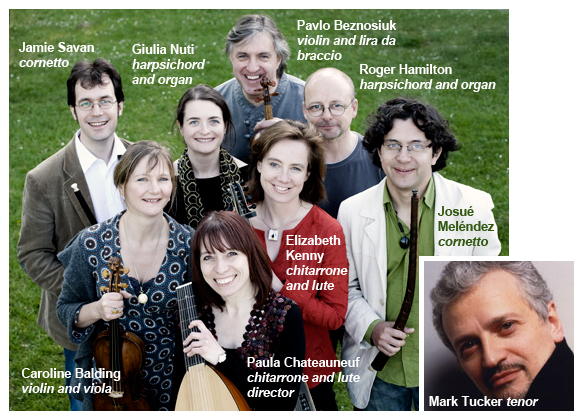 The notion of an entire ensemble improvising simultaneously is intriguing and enticing: this ground-breaking ensemble was established in 2009 to explore hitherto uncharted territory in improvised music, presenting programmes of extemporization in 17th-century Italian traditions. This is not ‘crossover’ or ‘fusion’ but improvisation, pure and simple, involving richly ornamental techniques developed by the finest musicians working in the courts, churches, and noble houses of seicento Italy.

In 17th-century Italy opera performances and church celebrations often featured ensembles famous for their group improvisations, described by contemporaries as heavenly music on earth. These highly-skilled musicians frequently worked from simple musical frameworks rather than literal texts. Through extemporization they transformed these sketches into lavish, sophisticated, and personal performances.

The Division Lobby’s exciting series of debut concerts were received with extraordinary interest and enthusiastic praise. The ensemble has given performances and workshops at Southbank Centre London as part of the Take the Risk Weekend of Early Improvisation, Concertgebouw Bruges as part of the Come On! Action! festival of improvisation, the University of Birmingham, University of York, and Newcastle University. A feature on the ensemble and its pioneering mission to highlight early improvisation was broadcast on BBC Radio 3’s Early Music Show.

The brainchild of leading lutenist Paula Chateauneuf, this group is one of the fruits of a research project delving into a neglected area of performance practice made possible by a grant from the Arts and Humanities Research Council in conjunction with the University of Brimingham and Southbank Centre, London. An all-star line-up of early musicians has been assembled especially for this project.