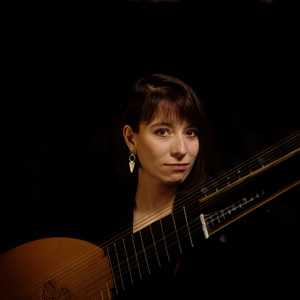 Soloist, accompanist, teacher and linchpin of numerous early music groups, Paula Chateauneuf has earned her reputation as one of the most respected and admired musicians in the early music world. After studying with Patrick O’Brien in New York City she received an American Fulbright Scholarship to study with Nigel North at the Guildhall School of Music and Drama and quickly established herself as a versatile member of the London scene. During this time Paula was involved in pioneering work with the group Circa 1500 and (on medieval ‘ud) with Sinfonye, where her improvisational skills came to the fore. It was also then that long-lasting musical relationships were established with the New London Consort (Philip Pickett), and the Gabrieli Consort & Players (Paul McCreesh), whose principal lutenist she remains to this day.

Paula’s in-depth knowledge and imaginative skill in the art of basso continuo has made her one of the most sought-after accompanists in the field of early music, resulting in fruitful collaborations with many leading singers including Catherine Bott, James Bowman and Michael Chance. Her unique and ground-breaking performances of 17th-century Italian monody with the Anglo-Italian tenor Mark Tucker have received international acclaim, leading to numerous recitals and masterclass invitations. Her love of Spanish music, dance and the baroque guitar has led to an ongoing collaboration with the dancer/choreographer Ana Yepes, and their work has taken them on tours to Europe and Japan.

Paula’s wealth of experience in early opera has led to involvement in productions as both coach and continuo player with the Bayerische Staatsoper, Maggio Musicale Fiorentino, Royal Opera House, English National Opera, Kent Opera, the Early Opera Project, Glyndebourne, New Israeli Opera, Vlaamse Opera, the Liceu Barcelona and the Stuttgart, Hanover and Bologna opera houses. Her advice is eagerly sought by professional singers on a wide range of music from the lute-song repertoire, the masterpieces of Monteverdi through to the operas of Handel.

Paula has recorded extensively for Decca, EMI, Deutsche Grammophon, Hyperion, CRD and Virgin Classics. She researched, edited and recorded a highly successful CD of songs by Barbara Strozzi for Carlton Classics with Catherine Bott and her performance on violinist Pavlo Beznosiuk’s recording of Biber’s Rosary Sonatas has met with high praise.

In addition to her private teaching and coaching Paula often gives masterclasses. She is a regular coach on early music courses run by the Britten-Pears Young Artist Programme and has also been invited to teach the New York Continuo Collective. She runs a class in basso continuo and early improvisation at the University of Birmingham, where she is also the lute tutor for the University’s Centre for Early Music Performance and Research and an Arts and Humanities Research Council Fellow in the Creative and Performing Arts.

Biography not to be reproduced without permission. Please contact the ensemble for the most up-to-date version.